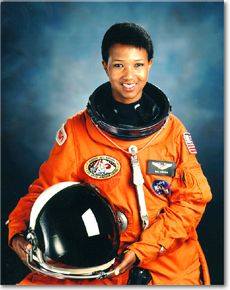 Today is the birthday of this week’s #WomenInSTEMWednesday: Mae Jemison!

Jemison was the first African-American woman in space but was also so much more! She is a trained dancer, has a medical degree and started numerous companies.

When Jemison was growing up, she was enamored with the Apollo missions but noticed that no one looked like her. Despite that, Lieutenant Uhura on Star Trek became Jemison’s role model.

At the age of 16, she started studying at Stanford University as a chemical engineer. She went on to Cornell University to get her medical degree before going to work in the Peace Corps.

In 1992, Jemison would go into space achieving her goal. She began each of her shifts in space saying, “Hailing frequencies open,” as a reference to Lieutenant Uhura and would go on to appear in her own episode of Star Trek: The Next Generation as Lieutenant Palmer.

Jemison is also part of the “100 Year Starship” project that plans to have humans travel to the next solar system within the next 100 years.

Mae Jemison didn’t let a fear of heights or the fact that she hadn’t seen anyone look like her go into space stop her. She changed that and continues to be a role model for young ladies today. #WomenInSTEM

When the sun is out, you smile!
Sunday smiles.
Yes, this meteorologist has an umbrella print makeup bag. Not even ashamed about it.
We’ve made it to Thursday. Let’s make it to Friday!!
All smiles because it’s my Friday!!!
I’m back to wearing other colors besides pink/red. Decided to go with a dark teal today (even though it’s looking more dark blue).
Happy Valentine’s Day! Here’s day 5 of my red/pink week!
Red on red on red (and some pink) for day 4 of my red/pink week!
I’m so excited about this guys!! At a luncheon today, I was a Women In STEM in Oklahoma honoree. Thank you to everyone that pushed me in my STEM love and let’s me share my STEM love with all of you! #OKWomenInSTEM
%d bloggers like this: